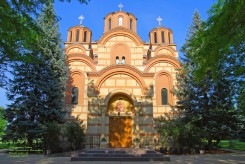 Aleksandra’s Note: I am so pleased to have the opportunity to share this wonderful documentary film produced and directed by Mirko Popadic of Mir Productions in Chicago and written by Joe McGarry! This film gives the historical background of the development of the New Gracanica Serbian Orthodox Monastery in Third Lake, IL along with fantastic documentary footage of the process. Before your very eyes, you will see the birth of this Christian landmark in Chicagoland that’s been welcoming the Orthodox faithful for 30 years now since August 12, 1984.

When I first saw this film courtesy of producer and director Mirko Popadic back in 2009, I was in awe of how well it was done and watching the process of the building of the New Gracanica Monastery was absolutely mesmerizing. The historical background provided in the narration complements the film footage beautifully. For this extraordinary documentary, Mirko received a Chicago Emmy Award in 1990 as producer.

In “BUILD THYSELF A CHURCH” Mirko Popadic gives the Christian community a real historical and visual treasure through the magic of film. If one would like to learn more about his production company here in Chicagoland, please visit http://mirproductionsinc.com

As you watch, and I encourage you to watch the 35 minute video from start to finish, you will undoubtedly see many people you recognize or have known over the years, especially if you live in the Chicagoland area.

A heartfelt “Thank You” goes out to Mirko Popadic, for making “BUILD THYSELF A CHURCH” available for all of us and for future generations to enjoy and learn from!

“Build Thyself A Church was produced and directed by Mirko Popadic and written by Joe McGarry.

“As Bishop Iriney wrote, Build Thyself a Church has and will continue to impact future generations.”