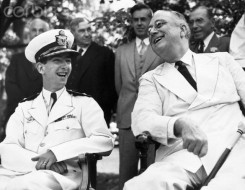 In 1942, U.S. President Franklin D. Roosevelt invited King Peter II of Yugoslavia to the United States as a guest of the American government. On June 21, he began his official state visit to the United States. The state visit to the U.S. lasted from June 21 to 27, 1942. He was in the U.S. from June 21 to July 29. He visited Washington, DC, Detroit, Michigan, New York City, and Lake Placid, New York. He also visited Canada during this trip. In the U.S., he met with FDR and his Cabinet. He also met with the President at the White House, where he spent the night. British Prime Minister Winston Churchill and Peter II in a 1941 Movietone News newsreel as they inspect coastal defenses in the southeast of England, July 14, 1941.

King Peter II of Yugoslavia came to power in 1941 following the March 27 coup in Belgrade. He was 17 years old at the time. His uncle Prince Paul had ruled the country since the assassination of King Alexander in Marseille, France on October 9, 1934. He fled the country 11 days later as Germany invaded the country. The April 6, 1941 German invasion of Yugoslavia forced him to flee to Great Britain with his government-in-exile, with Prime Minister Dusan Simovic. They arrived in England on June 21, 1941, met by the Duke of Kent. Peter was featured in newsreels with his mother Maria in which he voiced his determination to gain aid for the guerrilla resistance movement against the Axis occupation. He also appeared in a newsreel with Prime Minister Winston Churchill during an inspection of Britain’s coastal defenses. Churchill was photographed with Peter along with British commander lieutenant-general Bernard Law Montgomery. Peter headed the Yugoslav government-in-exile based in London. In Axis occupied Yugoslavia, Draza Mihailovich was promoted to the rank of general and made the Minister of War. In 1941, the UK, the U.S., and the USSR, were fully supporting the exile Yugoslav government.

On April 6, 1941, as Axis troops invaded Yugoslavia, U.S. Secretary of State Cordell Hull issued a statement on behalf of the U.S. government condemning the attack and pledging support for the new regime under Peter II:

“The barbaric invasion of Yugoslavia and the attempt to annihilate that country by brute force is but another chapter in the present planned movement of attempted world conquest and domination.

Another small nation has been assaulted by the forces of aggression and is further proof that there are no geographical limitations or bounds of any kind to their movement for world conquest.

The American people have the greatest sympathy for the nation which has been thus so outrageously attacked and we follow closely the valiant. struggle the Yugoslav people are making to protect their homes and preserve their liberty.

This Government with its policy of helping those who are defending themselves against would-be conquerors is now proceeding as speedily as possible to send military and other supplies to Yugoslavia.”

Two days after the Axis invasion, FDR sent a message to Peter II reinforcing the U.S. support of his government:

As I have assured Your Majesty’s Government, the United States will speedily furnish all material assistance possible in accordance with its existing statutes.

I send Your Majesty my most earnest hopes for a successful resistance to this criminal assault upon the independence and integrity of your country.”

The statement appeared in the April 12, 1941 U.S. Department of State Bulletin. Peter and his exile government had the official support of not only Great Britain, but the U.S., USSR, and France, of all the Allied countries. On April 5, 1941, the USSR signed a Treaty of Friendship and Non-Aggression with his government. Joseph Stalin threw his support behind the Peter II regime. On June 25, he spoke before the U.S. Congress, pledging his support for the Allies. He stressed that the U.S. represented the values and principles “that we all fight for” and acknowledged the guerrilla resistance movement led in occupied Yugoslavia by Draza Mihailovich and the Chetnik guerrillas. He sought to gain U.S. support and aid for the guerrilla resistance in Yugoslavia. After his speech, Peter attended events in Washington, DC, as a guest of the U.S. government. On June 28, Peter watched a boxing match at the National Training School for Boys in Washington, D.C. with U.S. Assistant Secretary of the Interior Oscar Chapman and U.S. Attorney General Francis Biddle. He also visited Detroit, Michigan, New York City, and Lake Placid, New York in the U.S. In Canada, he visited Ottawa and met with Canadian Prime Minister Mackenzie King. He appeared in the House of Commons in the Canadian Parliament in Ottawa where he received an ovation. He also traveled to Montreal. In Detroit, he met with Edsel Ford, the son of Henry Ford and the President of the Ford Motor Company. He also met with Michigan Governor Murray Van Wagoner. Detroit’s industrial production was crucial for the war effort. On July 1, 1942, he was photographed driving an Army Jeep at the Ford Motor Company proving grounds in Detroit with Edsel Ford in the passenger seat. Peter also toured the Ford Willow Run Plant outside of Detroit. Detroit was the “Arsenal of Democracy” during World War II. President Franklin D. Roosevelt had declared that Detroit was “the great arsenal of democracy.” He also met with Father Firmilian Ocokoljich of the Serbian Orthodox Church “Ravanica” in Detroit on June 30, 1942. The Detroit News covered the event. He also was able to attend a New York Yankees baseball game. He was photographed in the stands as the 1941 World Series champions played the St. Louis Browns at Yankee Stadium. Yankees manager Joe McCarthy presented him with a signed baseball while New York City council president Newbold Morris looked on. While in New York, he also met with Nikola Tesla and New York mayor Fiorello H. LaGuardia. “King Peter II, regent of Yugoslavia, meets with Father Firmiliam[n] Ocokoljich of the Serbian Ravanica Church during his visit to Detroit, Michigan.” June 30, 1942. The Detroit News.

The U.S. media covered his visit extensively and favorably. He was a U.S. ally, part of the countries that made up the United Nations allied against the Axis powers. The U.S. government also released a series of stamps in support of the Overrun Nations, the European and Asian countries invaded and occupied by the Axis. In “King Enjoys Baseball”, in the The Spartanburg Herald-Journal, Monday, July 13, 1942, page 7, Spartanburg, South Carolina, reported: “The boy king, in midst of lengthy U.S. visit, has shown much interest in the American way of life.” He spent the remainder of the war in Great Britain. On October 20, 1944, the Soviet Red Army captured Belgrade and installed Josip Broz Tito in power. The Communist dictatorship had no intention of retaining the monarchy. After the war, Yugoslavia’s Communist Constituent Assembly voted on November 29, 1945 to abolish the Karadjordjevic monarchy established in 1903. He lived the remainder of his life in the United States. He died on November 3, 1970 at the age of 47 and was buried at the St. Sava Serbian Orthodox Monastery in Libertyville, Illinois. On January 22, 2013, his remains were transferred to Belgrade, Serbia for reburial. On May 26, 2013, he was reburied in the Karadjordjevic family mausoleum in Oplenac in the town of Topola south of Belgrade.

His historic and landmark visit to the United States in 1942 at the height of World War II was forgotten and relegated to obscurity. It became a footnote in history.