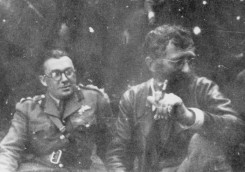 Who else, along with General Draža Mihailović, did the Communists accuse of Nazi collaboration?

Nowadays it is well known that in 1946 General Draža Mihailović was convicted by the Communists in Belgrade for collaborating with the Germans. What is generally forgotten, however, is that the Communists also accused the British and Americans of Nazi collaboration at the same trial. Many of them had fought within Četnik units under Draža’s Supreme Command almost throughout the entire war.
General Armstrong, Colonels Hudson, Bailey and Rootham, Lieutenant Howard, Majors Grinliss, Greenwood, Rowe, Sally Flood, Archie Jack, Captains Lofts and Michael Lees, and many other British officers, heard at the outset of the trial the Communist allegations that Četniks had sided with the Germans throughout the war and not with the allies. The ensuing outrage prompted the British government to request that the new Yugoslav government admit British witnesses at Mihailović’s trial. That request was rejected by Prosecutor Minić, who said, amongst other things: “During the trial we discovered that Colonel Bailey’s mission while on the staff was to incite Mihailović to undertake operations against the People’s Liberation Army along with German and Italian occupiers in the enemy’s fourth offensive against the People’s Liberation Army between January to May 1943.”
Yet more absurd was the charge against one of the most famous American women of that time, Ruth Mitchell, who had narrowly escaped the clutches of the Gestapo. The daughter of famous U.S. Senator, John Lendrum Mitchell, Ruth was brought to the Balkans by her husband, British intelligence officer Stanley Knowles. A journalist of restless spirit, she fell in love with the Serbs at first sight, and especially so with the Četniks. The day she took the Četnik oath before Vojvoda Kosta Pećanac was recorded as one of the most important events of her life; I became a ”Četnik – to the death”, she wrote proudly in her memoirs. When war broke out, Ruth Mitchell fell into the hands of the Gestapo while trying to make contact with Draža Mihailović. She passed through five German prisons in the Balkans and six camps in Germany before breaking free at the end of 1942. She then returned to America and in 1943 published a book, “The Serbs Chose War’”. Her experiences in Yugoslavia filled newspaper columns.

Ruth Mitchell saw with her own eyes the changes in Western policy towards Yugoslavia at the time they were just starting to be felt. In addition to her journalistic career, she began to engage in politics. She became an honorary vice president of the Serbian National Defense Council of America, the oldest and largest Serbian organisation in the U.S., and actively participated in its work. When criticism of its newspaper, Amerikanski Srbobran, began to be made by the U.S. Office of War Information as part of new Western policy, Ruth Mitchell responded by writing to the Office’s Director, Elmer Davis, on 19 June 1943:
“I fully understand the position of Amerikanski Srbobran in relation to Dražа Mihailović. I accuse you of treason towards American honour and the greater interests of the United States in the Balkans. Your Office’s attack on this newspaper is an infamous bluff, because the paper is written in defense of our Serb allies against Croatian and Communist slander.”
Minić accused the American heroine Ruth Mitchell of being no less than a member of the Gestapo. He claimed that as a member of the Gestapo she collaborated with the Yugoslav Ambassador in Washington, Konstantin Fotić. Minić further accused Fotić of collaboration with another Serbian great – the poet, Jovan Dučić. Had Dučić survived World War II, there is no doubt that he would have been accused alongside Draža.
These are Minić’s words:
‘Using the publication Srbobran (which is published in the USA), Fotić, along with Jovan Dučić, organised a major campaign to create a Greater Serbia; a campaign against the re-establishment of Yugoslavia; a campaign to accuse the entire Croatian people of the mass slaughter of the Serbian population committed by the Ustaša; a campaign against the national liberation struggle of our people led by the People’s Liberation Army and Partisan units; and within that campaign called those who were fighting for the introduction of Bolshevism in the country a gang of international criminals and thugs.’
In the U.S., the greatest repercussions resulted from the accusations that Ambassador Fotić had collaborated with renowned American journalists, who had been named as reactionaries by the Communist court, and of course the charges against Ruth Mitchell.

From the courtroom, which was actually anything but a proper courtroom, Minić thundered:

“Via reactionary journalists Ray Brock, Markham and others, Fotić spread false news in the foreign press about the events in Yugoslavia; at public gatherings in the U.S. he falsely presented the accused Mihailović as a resistance fighter against the occupiers; to this end he was assisted by Gestapo member Ruth Mitchell, whom he presented as an officer of the accused Mihailović.”

Today it is clear that all this was nonsense; yet, the District Court in Belgrade has already delayed General Draža’s posthumous rehabilitation proceedings for five years.

The author Miloslav SAMARDŽIĆ has written a book which he believes should also be available to English-speaking audiences and has posted a request for translators. Please make a comment if you are able to help.