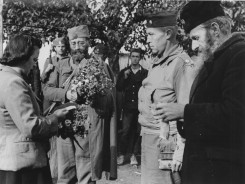 The Serbian people receiving General Mihailovich in a village in Doboj in Northern Bosnia and Hercegovina, October 1944. General Draza Mihailovich is receiving the flowers from the young lady and American Lieutenant Colonel Robert H. McDowell of the OSS “Ranger Mission” is standing to the left of Mihailovich, holding the general’s coat.

Head of the last Mission to Mihailovich (“RANGER”) in 1944, American Lieutenant Colonel Robert H. McDowell of the OSS – Why he was the ideal Liaison Officer

“The ideal liaison officer assigned to Yugoslavia in World War II theoretically would have had (1) a knowledge of Yugoslavia and her peoples, (2) an understanding of Yugoslav politics, (3) fluency in the Serbo-Croatian language, (4) a knowledge of Yugoslav history and of wartime developments in Yugoslavia, (5) an experienced perception of the world situation and, in particular, an understanding of the nature and tactics of communism, and (6) actual experience in both intelligence and guerrilla warfare. No single officer, needless to say, possessed all of these attributes. But of all the British and American officers who were sent into Yugoslavia during World War II, Lieutenant Colonel Robert H. McDowell came closest to the mark.

“The son of missionary parents, McDowell had grown up in the Middle East, spoke Arabic, Turkish, Syriac, and several other Middle Eastern languages, as well as French and German, and had served as an officer with British intelligence in the World War I period, first attached to the Armenian guerrillas operating against the Turkish government, and then, after the war, working with the anti-Bolshevik guerrillas in the Caucasus. Subsequently, he had become a professor of modern Balkan history at the University of Michigan, where, incidentally, he was generally regarded as a left-liberal. Before he was sent into Yugoslavia in August 1944, McDowell had been involved for a number of months in an analysis of all intelligence about Yugoslavia reaching OSS (Office of Strategic Services) from inside the country and other sources. Adding all this up, McDowell emerges possessing every single attribute of the ideal liaison officer, with the exception of fluency in Serbo-Croatian. (He was, however, able to converse with Mihailovich and the senior members of his entourage in French, in which he was fluent.) It is a measure of the esteem in which his abilities were held that he served for many years after World War II as senior analyst of Soviet affairs at the Pentagon.”

David Martin
Patriot or Traitor:
The Case of General Mihailovich

*****
If you would like to get in touch with me, Aleksandra, please feel free to contact me at ravnagora@hotmail.com