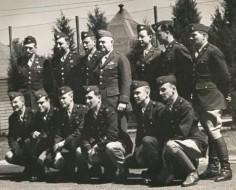 Through two Bills presented in the House of Representatives and Senate, Representative Bob Latta (Republican, Ohio) and Senator Kirk (Republican, Illinois) propose to award a Congressional Gold Medal collectively to the members of the Office of Strategic Services (OSS) for their service during World War II.

The Halyard Operation, in which American OSS officers worked with General Draza Mihailovich and his resistance forces, to rescue and evacuate over 500 American airmen shot down by German forces over Yugoslavia during World War II, is one of the OSS successes specifically cited in the Bill. Several of the OSS officers involved in the Operation Halyard were Serbian-Americans, including Nick Lalich, George Vujnovich, George Musulin, Eli Popovich and others.

The Bill includes this sentence among other examples of OSS accomplishments:

“OSS Operation Halyard rescued more than 500 downed airmen trapped behind enemy lines in Yugoslavia, one of the most daring and successful rescue operations of World War II.”

The passage of this Bill in the House and Senate would help to cement official U.S. recognition of Halyard as one of the most important OSS operations during World War II. The Bill states that the OSS Gold Medal will be displayed at the Smithsonian.

In requesting Congressional support, we suggest that you support the Bill as a whole, rather than only Operation Halyard. If any of your relatives participated in the OSS, you should inform your Congressional Representatives of their direct involvement.

You may use the following link to read the text of the Bills and tell your Member of Congress and your senators that you are supporting the Office of Strategic Services Congressional Gold Medal Act (H.R. 3544 and S. 1688) and that you would like them to co-sponsor and support this legislation to honor the OSS. Be sure to send messages about both bills in the House and Senate, respectively: